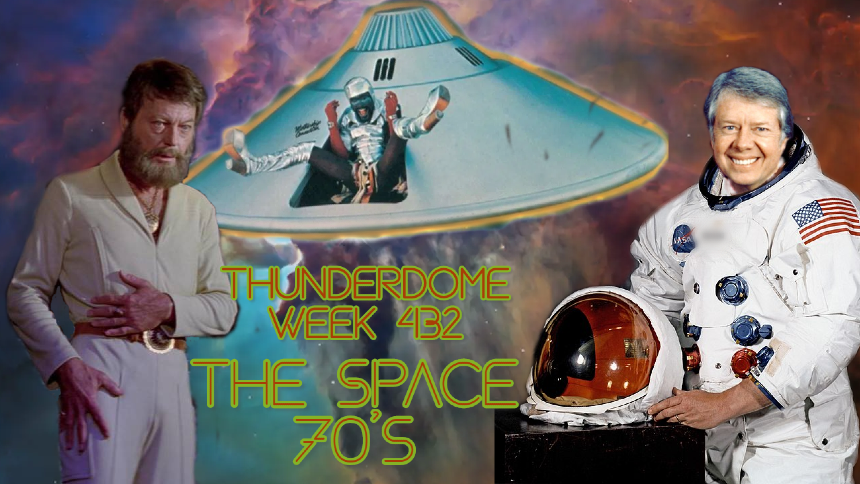 That trip back in time was fun, but now it's time to the future. A future that kind of was, and kind of wasn't.

When were the Space 70's you might ask? Well, they sort of straddled the 70's and the 80's. From about 1975 to 1984. It was a magical time when we thought things were only going to get better, and cooler, and weirder. And goddamn were the Space 70's weird. I remember this one time that Starbuck tried to quit flying in the middle of a war to be an agent for some lounge singers with four eyes. No, they weren't wearing glasses. They literally had four eyes. Two mouths, too... But that's a story for later.

If you request it, I'll give you an 8-track song to inspire you. If you really want to, you can :toxx: for a hell rule. NOTE - I do not give out easy hell rules! You can just :toxx: if you feel like it for the impetus to write, too - but make it clear that you do or do not want the hell rule to go along with it.

Might, for bonus points
Write a story that's actually set in the Space 70's.
*Note: While brazen Fan Fiction is no good, you can make references to events in the Space 70's as if they were actual, historical events.


8 Total Submissions, 0 Total Failures:
1.
Winner
Staggy
Getaway Trip
2.
Djeser
First Contact Protocol
3.
Honorable Mention
GrandmaParty
Where to Go When The World Doesn't Need You
4.
Honorable Mention
Nae
Love Train
5.
Gorka
Beyond the boundary
6.
Loss
Applewhite
The Dark Planet
7.
flerp
to those who stared at the stars and wanted to know them
8.
Thranguy
2021
Failures who signed up but did not submit:
--
.